Once the roof had been put on and the opening doors re-attached, the work on the observatory was far from over.

To begin with, the next day rain was forecast, and that was the first test of the roof. I sat in the shed whilst the rain lashed down on the roof, and after a while I found I had four leaks.

The leaks came from where we had screwed in the hinges but then moved them, so the next day I was on the roof filling the holes with mastic.

I also found that I needed a lot more felt pins on the roof so hammered a load more in.

I also went to Wilkinsons and purchased a few more ironmonger bits, including some black cast handles which I have attached to the outside of the roof. I also purchased some cheap rope from the pound shop to allow me to open and close the roof.

I ended up buying some screw-in loops to tie the rope to on the inside and then push open the roof from the inside whilst keeping hold of the rope to lower the roof down onto the roof wooden stoppers which I also added to ensure the roof came down horizontally.

I then added the same rope on the outside of the roof and tide it to the black handles on the top of roof, then to close the roof, I go outside with a small lightweight aluminium ladder and push the roof closed, whilst holding onto the rope and lowering the roof back down.

I also purchased some cheap black carpet from Carpetright and put that down on top of some newspaper. I kept the carpet down by using a standard office staple gun and stapling it into the wood.

I purchased a cheap computer desk from Argos, and added a Belkin UPS so to keep everything on for a while in case the power goes off.

I have also added some shelves, very useful for keeping things neat and tidy, and I managed to purchase a wood drill bit the same size of a 1.25″ eyepiece and drill 6 holes in the shelf in order to hold my eyepieces.

I also purchased some cheap 3m USB 2.0 extension cables from eBay so that I could run these cables under the carpet from the PC to the telescope. This means that I have usb sockets ready to use around the wedge, useful for setting up webcams, DSLR and CCD imagers, plus they were only about £1.60 each. 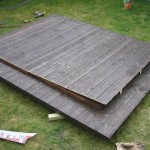 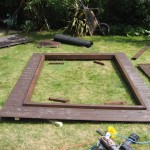 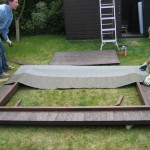 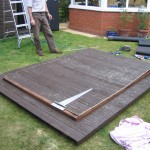 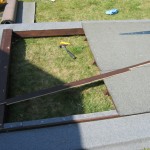 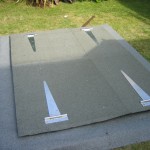