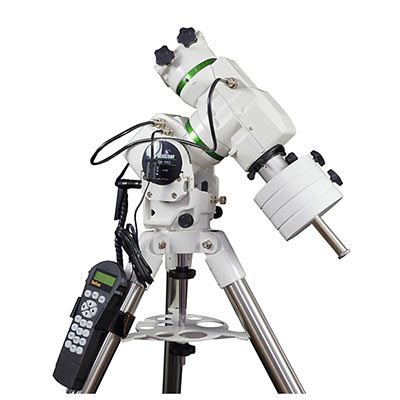 Bolting Down The Astronomy Pier

As you probably know I purchased an Astro Engineering Pro Pier and drilled the holes for the pier bolts at the time I laid the slabs for the base of the shed.

I had thought I was going to secure the bolts at the same time of laying the slabs, but I must admit got a bit scarred about doing it, and then kept putting it off. I then thought about doing it before the shed was erected, but then ended up doing it once the shed was completed inside and out, so in fact I made this the last of my jobs.

I used a bolt kit from Pulsar Optical which was around £35, it includes the four pier bolts, with washers, nuts and dome nuts. It also comes with a tube of gunk which has to be used with a mastik type gun.

I had previously hired an STS drill to drill out the holes, so I began by cleaning out the holes. To do this I attached a small tube to the end of an old vacuum cleaner to get to the bottom of the holes I had drilled.

Next I unscrewed the end of the gunk and found a metal clip around the inner plastic sleeve. I cut this metal clip off and then re-attached the nozzle and place the tube into the dispensing gun.

Now for me, on the first attempt the gunk did not set at all. I was deemed to have been very unlucky as inside the tube there are two colours which must mix together before they are squirted into the pier bolt holes.

For me, this not happen on my first attempt, it looked like one of the chemicals was restricted from leaving the tube. So I thought everything was ok ,so left it overnight and came back in the next day at lunchtime to find the bolts had not set in the groud at all. So off I went back to Pulsar Optical who were straight onto the phone to the manufacturers of the gunk and the MD of the company even phoned them back. The company offered to send a new tube of gunk and some metal cleaning brushes so that I could get the unset gunk out of the pier bolt holes. James at Pulsar Optical also provided me with another set of clean bolts, which was really good of them.

The next day I went back to pick up the cleaning brushes and the new tube of gunk. That evening at about 7.30pm I began again. Once I had cleaned out the holes I cut the metal end of the gunk off and put it in the gun holder. I then made sure this time that I could see the two chemicals mix inside the nozzle. Now it did take at least two full trigger squeezes in order to get a good mix of the chemicals.

I squirted the gunk into the holes one at a time, starting with the nozzle at the base of the holes and filled them to about 50% full. I then took my electric screwdriver and added an attachment so that I could screw the bolts into the gunk in the holes which is now very dense. This allows the gunk to get into the grooves of the bolts.

I repeated this for each of the four bolts in turn. You will find that a lot of gunk will spill over the holes, you just need to have a rag ready to clean this up.

I then lifted the pier over the bolts to make sure the bolts were in the right location. I then left the bolts overnight, and in the morning returned to find the bolts were completely rock solid in the ground.

I then placed the pier back on the bolts and tightened them up. Job Done!

There are many different ways of completing this job, as I was advised not to lift the pier on and off the bolts, as the weight of the pier could dent the grooves on the bolts and render them useless, but for me this was not a problem. You could always make a wooden template and use that as a guide. I was worried that the bolts would not set in the correct position, as there is really no room for error, so placing the pier on top of the bolts seemed the most reliable method to me.