As Mars is very prominent in the sky at the moment, I feel it is my mission to try and get the best possible image I can whilst I have the red planet in sight.

I purchased a new Baader UV/IR lens the other day so I was really itching to give it a go. I used my Philips SPC900 web-cam, and I took around 100 seconds of video each time at 10 frames per second and 15 frames per second, in order to get lots of frames to put into Registax.

I still do all my recording in the supplied Philips VLounge software, although I don’t think this is the best way to go about it, one reason is because the output format is .MPG and I have to then convert it to .AVI to get it into Registax, which is a real pain. 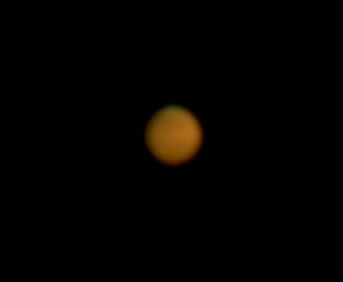 See my second attempt for better Mars images. I have learnt a lot since this post.

You can make out some terrain marks of Mars in the image, but I want more! I still think I can get a better image, as this footage is a bit fuzzy and kind of out of focus. The video was taken when Mars was quite low in the sky. As at the moment I just can’t stay out too late as it’s so cold outside by the time Mars is high in the sky, but hopefully during December and January I should be able to get some more imaging done. I am also reading The Lunar and Planetary Webcam User’s Guide book, so hopefully I should pick up some more tips from this book.