At the beginning of the evening of the 12th August, I thought we we’re going to have cloudy skies as at around 9pm the heavens opened and it was raining heavily, but at around 11pm when I looked out the sky was crystal clear.

I managed to stay up until 00:30am and then I ventured outside, I stayed out until about 2am, but I must say I was slightly dissapointed as I thought there would be lots of meteors every couple of minutes, well enough to allow me to put my SLR onto bulb and run it for 30 seconds a time and hopefully catch a meteor on film, but alas this did not happen.

I eventually think in about 90mins I spotted about 12 meteors. It was nice to stay up late and watch Mars and the Pleiades rise over the horizon and I managed to take a picture of this below: 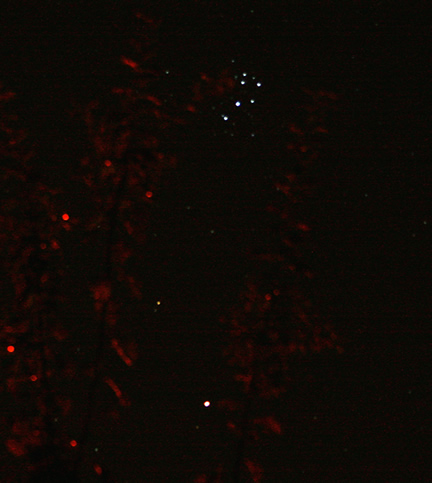 Pleiades at the top of the image, with Mars at the bottom, shown in between my plum tree in my garden.

After getting up today at 8.30am I noticed the postman had delivered my BBC “The Cosmos” posters from the Open University together with a OU magazine. The posters are ok, nothing amazing, there is a nice photo of the moon landing on one of them.