I could not believe it another clear night. I decided to out a bit earlier tonight whilst it was still light and set up. The moon was out and a nice site in my garden. I decided to try and take some video of the moon using my Philips SPC900 to try and compare the output with the Logitech Quickcam Pro4000. It was also a good time to try out my Canon SLR on the moon.

The only problem going out so early with the laptop in tow was that lots of mosquitos were attracted by the light and the taste of me! So I darted back inside to cover myself in insect repellant, which seemed to not do too much, it wasn’t until the laptop was turned off and it got darker that they seemed to leave me alone.

The video of the moons surface using the SPC900 was not great as the VLounge software kept setting itself to 15fps, which I don’t think is high enough, as the video did seem to judder occasionaly, unless the 15fps was too high and the laptop could not handle the recording, but I am sure I set the Quickcam to video at a faster frames per second than 15 and that was ok. So I only have stills to show you.

Anyway, below are some shots of the moon I managed to get with the DSLR. 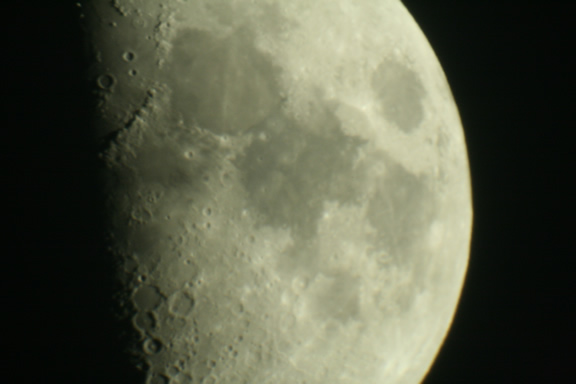 There was a lot of trial and error with taking the photos, most of the time I used a 2x barlow on the end of the camera adaptor or put an eyepiece inside the camera adaptor. Where the moon is shown whole – these were taken with no magnification at all (prime focus) just with the camera attached to the telescope. 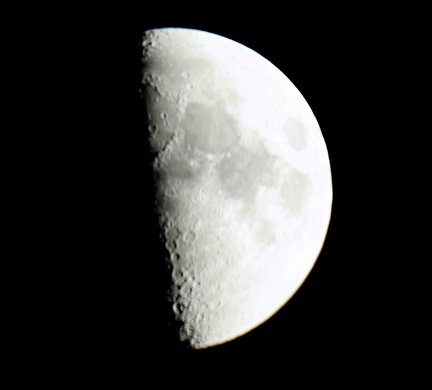 I have also made up a collage of shots below, to make one large shot, click on the image below to see the full shot.

My wife also sneaked out and took a photo of me and my set up. 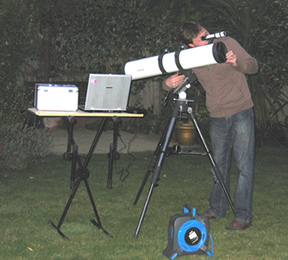