I was glad to go out last night on Halloween and see clear skies as I was after having a look at the Holmes Comet after it had managed to get so much news coverage and at the same time come away with some images of the comet which is currently in the Perseus Constellation.

The Holmes comet can be clearly seen with the naked eye in the north and it makes a good sight in a good pair of binoculars, even low powered telescopes will get a good view. Apparently the explosion of Holmes was so big that the comet brightened by a factor of a million.

Holmes is currently moving away from the Sun, and is almost midway between the orbits of Mars and Jupiter. When I looked through my LX200 10″ you could clearly make out a circular cloud of gas and dust emanating from the nucleus of the comet, together with a brighter cloud of material.

These images were not taken using a telescope but with my trusty Canon 400D SLR with a 300mm lens with the camera on top of my telescope, most images were at f/5.6 on ISO400 with exposures of around 30 seconds. 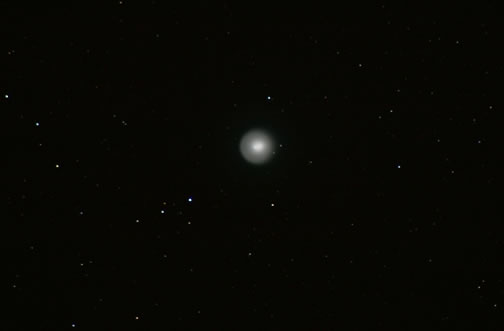 This second image of Comet Holmes below is a magnified image. 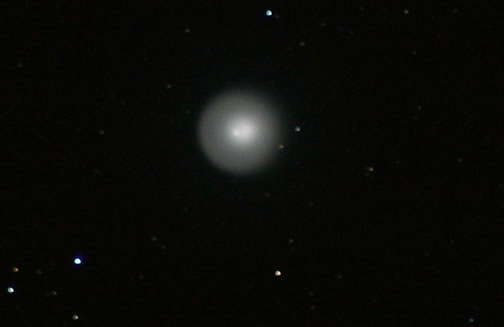 It is not clear what caused the comet to shed its skin, since it is moving away from the Sun’s energetic influence. One possibility is that the comet was hit by a meteoroid, or perhaps there has been a build-up of gas under part of the surface that catastrophically ruptured the surface.

Comet Holmes is a regular visitor to the inner Solar System. It takes 6.9 years to orbit the Sun once. It made its closest approach to our star last May, passing by at some 300 million km (190 million miles).