Around 9.30pm last night it actually cleared, so I headed outside after a cup of tea. Looking for the Comet using binoculars with Stellarium the previous night helped greatly, as I now knew the vicinity of Comet Lulin.

Comet Lulin was already in the Autostar Handset database, and I had made sure that I update the catalogs during the day time via the LX200 RS232 port and my laptop. The only problem I had was that after aligning the LX200 and then doing a GoTo to Comet Lulin, it was not in the eyepiece.

This meant just scanning the sky for Lulin, I found it best by using the attached LX200 8×50 viewfinder very useful for this. I then began by Syncing the Comet, but I found this did no good as the telescope did not track Lulin.

I started attaching my 300mm Canon lens to my camera and then attaching the camera to the top of the LX200, commonly known as ‘Piggybacking’. I then used the full 300mm and tried various bulb timings, my images below are what I actually got. 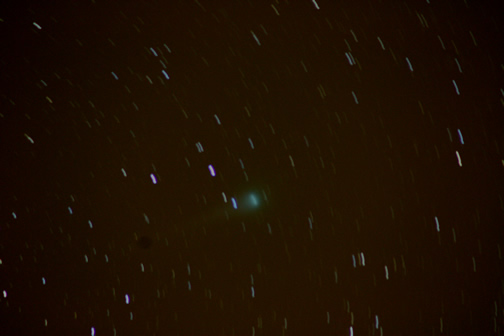 I did then try taking images by attaching the camera directly to the LX200, ‘prime focus’. I also tried my new Meade Off Axis Guider, but found that what I saw through the camera viewfinder was not what I actually saw through the eyepiece on the top of the guider, strange!

I did try taking some photos of Lulin using this method, but the images were very blurry, as the comet was moving pretty fast. 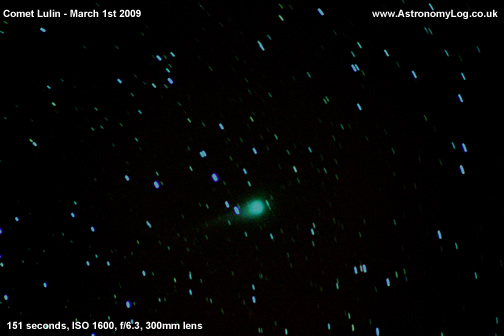