As we have been having some nice summery weather in April, it gives us a great chance to get out in the garden and do some solar imaging.

I have recently had a major equipment change, and sold my LX200 (sad to see you go) and I now have an NEQ6 Pro mount instead, with my trusty Skywatcher ED80 Pro onboard.

Luckily there seems to be a good selection of sunspots now appearing. I tried imaging with a newly purchased QHY5 camera which I intend to use as a guide camera, but I thought I would give it a go on the Sun. It’s ok but not a patch on the DMK21 camera. I was struggling to get 10fps out of the QHY5. 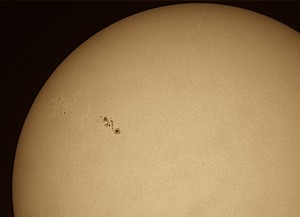 This image was taken with the Mono DMK21 with a UV/IR filter and Baader Solar Continuum filter through the ED80 Pro and I used some cheap Baader Solar Filter paper which was taped to the inside of my scope plastic cover. Even though this solar paper has a scratch in it and a big fingerprint on it, it still manages to produce some great images, at about only 1 inch across. The exposure time is very low in order to get the detail. I then open it up in Photoshop and add some false colour.