How To Make a Digital Camera Solar Filter

After buying my A4 sheet of Baader solar filter paper I have been making all sorts of filters.

The last of which has been a solar filter for my Canon 450D digital SLR camera, but my method of construction will work for any SLR camera, as its really simple.

I started with a flower shaped lens hood. I bought the lens hood a while back cheaply from someone in China on eBay, I think it only cost a few pounds. 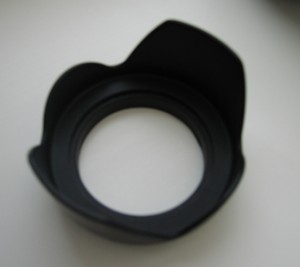 Cutting the solar paper can be a pain, it is best to cut the filter paper between two other sheets of paper and then remember that there is a really thin piece of transparent film on the solar paper which needs to be removed once the shape has been cut out.

I previously used scissors to cut out the solar paper, but for this attempt I used a very sharp scalpel. 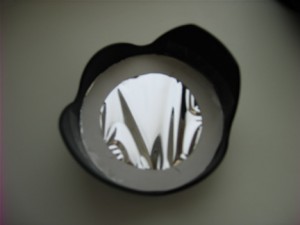 I then screwed on my new solar filter and took an image, usually I would take video of the sun with a CCD camera and then stack the results to get a final image. This time I took the sun image below with my DSLR at a setting of 1/4000th second at ISO100 with my 300mm lens.

I then played about a little with the brightness and contrast and colour levels with a photo editor program. 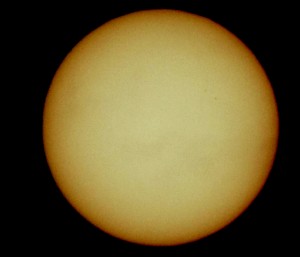 You can just make out two sunspots (1080) on the top right handside.