At last after what seems forever there was a clear night on the 18th July. The only problem was that because it had been raining earlier in the day the dew level was amazing.

The telescope was absolutely soaking, and I was more worried for my laptop and new Canon 400D – but I had to make the most of the clear skies.

I played about with the Canon 400D and tried out my new T ring and adaptor, I started looking at Jupiter and inserted a 9mm K9 into the camera adaptor but the focus was not great, so I went back down to 15mm Plossl and took some photos, the best of which is below: 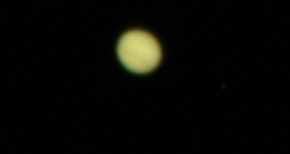 I still have a problem with getting blurry images, because my mount and telescope is not motor driven.

Then I tried to take some pictures of the heavens with the Bulb setting on my Canon camera on my other tripod, but everytime I tried to open the shutter for a set amount of time, but the camera just made a backward and forward noise and that was it, so I went into the garage and turned the light on and the Bulb function began working, I could not figure this out, so I asked a question on CloudyNights and I have found out that when outside in the dark I need to change the lens on the camera to MF – Manual Focus instead of AF Auto Focus – which I had it on – never mind, you live and learn!

Finally I retreated off of the wet grass and onto the patio and went hunting for my first site of the Ring Nebulae. Well after star hopping and with help from Starry Night Pro, I managed to actually find it, I have no photo to show you, but I was amazed to have found it! It did not look as good as you sometimes see it in books, as my poor old 5″ 130N was not really up to the job, perhaps I need an LX90 and fast!