I managed to get out on the day of Sunday 10th October to try out a 2″ red type filter I received which looks homemade. It was supposed to be an H-Alpha Solar filter, but it did nothing visually.  So I thought I would try it whilst imaging with my Imaging Source DMK21 camera and see if, with a low enough exposure I could see some prominences, but alas no. 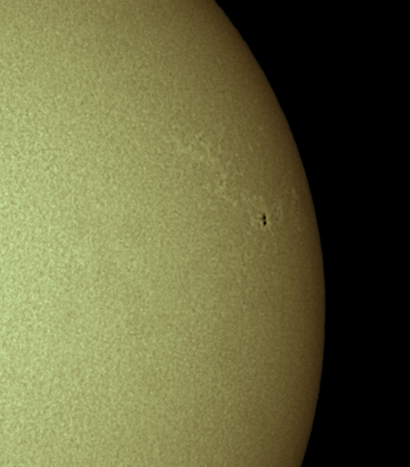 This has been recorded using the ICapture software provided by The Imaging Source and then processed in Registax 5 and then tweaked in Photoshop.

After several days of cloud and rain, the clouds parted and I managed to get a shot of the current sun with its sunspots.

This is not a great image, as it’s a bit blurred. Taken with my homemade DSLR solar filter on my camera using my 300mm lens. 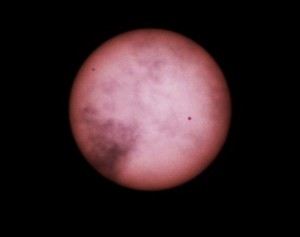 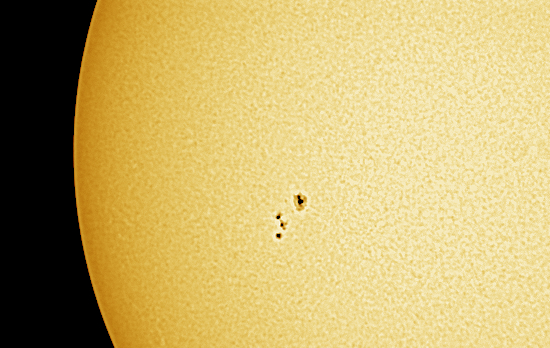 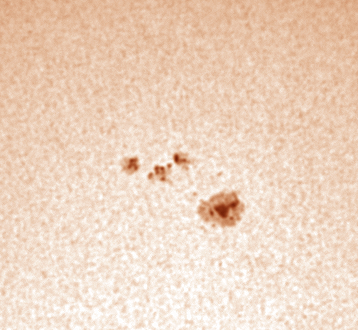 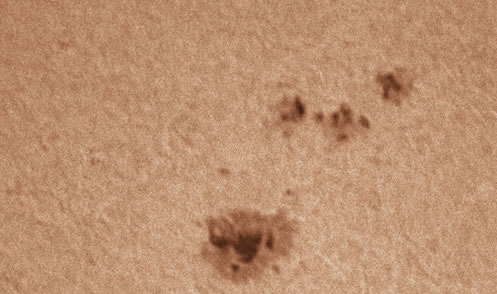 Writing this blog post from actually inside the observatory today, now I have sorted out my internet access, by using a powerline adaptor which passes the network data through your home electrical wires and is a lot more stable than wireless. especially if you are any distance away from the house.

Did not expect to do any imaging today, just opened the roof to check on the Sun and see if there was any activity, and there was, even better than when I looked a couple of weeks ago.

Here are my images, the enlarged images of the sunspots were taken on my 10″ LX200 with a glass solar filter, using an SPC900 webcam and then stacking in registax, one in colour and one in black and white. 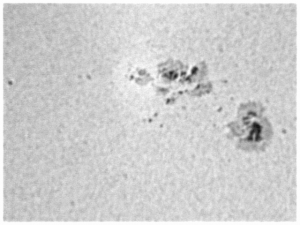 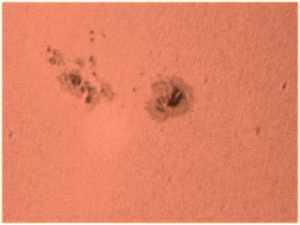 The large shot of the Sun below was taken via my Canon 450D SLR using a Televue 2x Barlow on my 80mm refractor with a Mylar paper solar filter. 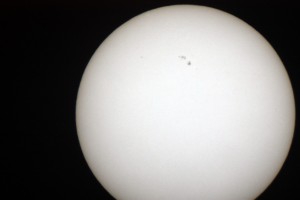 Today it’s snowing, but yesterday I managed to view the Sun and do some imaging – crazy weather!

Usually when viewing the Sun at the moment it’s a very uninteresting sinle coloured disc, but today (20th February 2010) I was amazed to see two small sunspots on the face of the Sun.

With this being such an unusual occurence lately I had to get some images.

Before I purchased my guidescope I only had solar filters for the LX200, by way of a hartmann mask and a glass ETX solar filter. Now I also have a mylar sheet type filter for my small refractor. Both provide different colours of the Sun.

The ETX glass solar filter gives an orange colour to the Sun, whilst the mylar sheet provides a kind of white colour.

The sunspots are so small you may have trouble seeing them on these images, but they are on the lower right hand corner. Click on the image to enlarge it.

First the mylar image on the refractor: 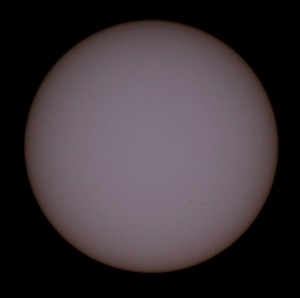 The image from my LX200 using an ETX glass solar: 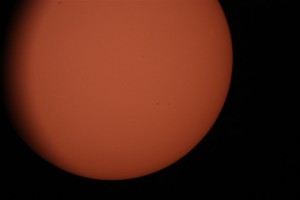