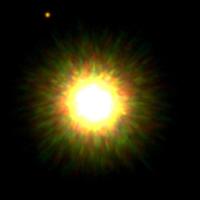 Astronomers have captured what is believed to be the first image of a planet orbiting another Sun.

A dramatic photograph shows the star, 500 light years away, as a blazing fireball. At the top left of the picture is an orange speck that scientists strongly suspect is a giant planet.

Astronomers have calculated that the “companion” is eight times more massive than Jupiter and a long way out from the star – 330 times the distance of the Earth from the Sun. To classify as a planet, the object must be orbiting the star.

Canadian astronomer Dr David Lafrenicre, from the University of Toronto, who led the Gemini Observatory team that made the discovery, said: “This is the first time we have directly seen a planetary mass object in a likely orbit around a star like our Sun. If we confirm that this object is indeed gravitationally tied to the star, it will be a major step forward.”

Until now the only planet-like bodies to be photographed outside our Solar System have either been drifting freely in space or orbiting “brown dwarfs”. These are dim pseudo-stars which are too light to maintain the hydrogen-burning fusion reactions that power the Sun.

Since the 1990s astronomers have detected more than 300 “extra-solar” planets in other star systems.

The most common method used is to look for the way a planet’s gravity causes its parent star to “wobble”.

Another technique is to measure the drop in brightness of a star when a planet moves in front of it. Powerful space telescopes due to be launched in the next 10 years will make it easier to “see” planets outside the Solar System. The technology should also make it possible to analyse their atmospheres for signs of life. The image captured by the Gemini Observatory provides a first taste of what may be to come.

Could this planet be a new home for us? Could the planet be the correct distance from the Sun to be inhabitable?