Life on Mars – Photo of Person?

These amazing images were among many sent back to Earth by Spirit, Nasa’s Mars explorer vehicle which landed there four years ago. 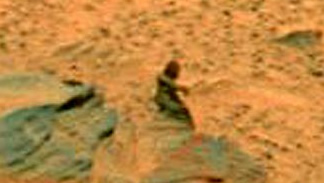 The images have been featured in the UK newspapers this week and are very interesting, but surely they are just rocks which have formed on the red planet into a human type form which we recognise as a female form sitting down with the outline of an arm and a leg.