I have been trying out widefield imaging with the Geoptik adaptor and my Atik 460 mono camera using a relatively cheap Canon 75-300mm zoom lens. I have found that you need to step down the focal length to a more reasonable f6 or f7 to get some nice round star shapes. But really you want to me imaging at about f4 or f5. This means purchasing a more expensive camera lens like the Canon 200mm f2.8 or Canon 100mm f2.8.

I began looking at the beige Canon zoom lenses. I was interested in the 70-200mm 2.8 lens. Expensive new, but they can go for about £500-£600 used. I had been looking at the second hand market for a while. But what put me off is that I imaged in Ha and OIII at 100mm on my zoom lens and as you have to take apart the imaging train in order to change filters I found it impossible to not move the zoom when doing so.

This meant that the Ha images may have had a different Field of View compared to the OIII images. That’s usually not a problem you have with telescopes which are fixed. So a fixed prime lens did make more sense, plus it may be sharper.

As most of the widefield images I have taken are between 100mm and 200mm. I thought that a 200mm prime lens and a 100mm prime lens would do the trick. So I then started looking at the Canon 200mm f2.8 lens. I was trying to discount it as I had purchased the smaller version of the Telefokus to help me focus and the maximum diameter on those rings are around 78mm. I was worried that the rings would not fit around the barrel of the 200mm lens, but it turns out they do fit.

How I know is that I ended up buying a used Mk 1 version of the Canon 200mm prime f2.8 lens. I can’t see much difference between the Mk1 and Mk2, although the Mk1 does have an in-built lens hood.

The Canon 200mm f2.8 lens is a bit heavier – maybe more glass elements and a larger diameter is the reason.

I am yet to give the lens a go yet as it has been cloudy every night for the last week, but I’ll post some feedback and some images once I have used it. 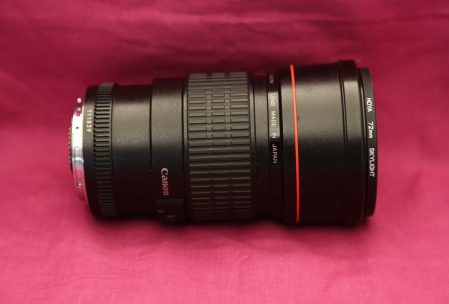