Astrophotography on the Go Book Review 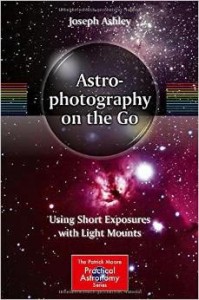 Astrophotography on the Go by Joseph Ashley

‘Astrophotography on the Go’ from Springer is part of the Patrick Moore Practical Astronomy series and the subtitle for it is ‘Using Short Exposures with Light Mounts’.

Most people who travel to do their astrophotography won’t take their usual hi-end home imaging equipment with them, but will usually have a separate set of telescope equipment that goes with them. This usually means taking a lighter mount and perhaps smaller telescopes together with a laptop and other astronomy equipment that is designed for travelling.

In ‘Astrophotography on the Go’ the author defines a lightweight and portable mount as one that weighs no more than 7.5kg, is easily separated, a standard dovetail saddle and collapsible and extendable legs.

The book begins with astrophotography basics such as the various types of telescope and details on cameras, accessories, mounts and how to put it all together.

The book then goes into a little more depth with two of the chapters dedicated to talking about astrophotography with Alt-Azimuth and lightweight EQ mounts. In these chapters such details as maximum exposure times with Alt-Az mounts are covered and the best way to set the mounts up.

Other topics in the book include performing astrophotography in light polluted areas, doing piggyback astrophotography and taking nightscapes. There is a nice little chapter on using the Deep Sky Stacker software. The chapter takes you through the basics of processing an image with DSS.

The book also includes a chapter on processing very short exposures; it does this by covering basic processing techniques that can be completed in most image processing software such as GIMP, Photoshop Elements, Deep Sky Stacker etc. These techniques include setting the black point, stretching the image, aligning histogram colour channels, adjusting color balance, using unsharp mask and changing the saturation settings.

Chapter 12 covers the different range of lightweight Azimuth and EQ mounts from all the main astronomy retailers including Meade, Celestron and Skywatcher. It also compares the two types of mount and the advantages and disadvantages of both.

There is a nice chapter entitled ‘Portable Observatories’ which talks about what you may want to pack when going on holiday or when flying abroad. The chapter details what you can get in a carry-on bag on commercial airlines and how to pack it all in.

The last chapter provides the reader with a list of sky objects to try imaging during the year, split into seasons then by months.

The appendices include how to plan an astrophotography imaging session, making lightweight mount tripod modifications, and about using a 4 SE mount with a wedge in equatorial mode.

Overall ‘Astrophotography on the Go’ is a nice book; it has a good mixture of both black and white and colour images throughout. I have not seen a book like this before which is dedicated to the travelling astrophotographer. It may not be for the seasoned astrophotographer traveller or person that frequently travels to star parties, but if you are thinking of travelling with your home setup or attending your first star party then this could be really useful.