Moon using an OIII filter on an 80mm 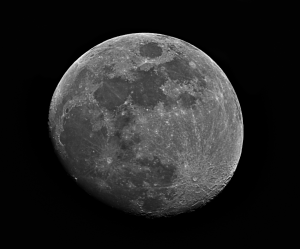 This was taken on 14th November 2013. I took it using my Altair Astro triplet 80mm refractor with an Atik 314L+ camera through an Astronomik OIII filter.

I took 20 frames of 1/1000th of a second (the lowest exposure the Atik 314L+ will do). I then stacked it in Maxim DL. I did not remove any darks or take any flats. I then took it into Photoshop and sharpened it and then used a high pass filter on it to sharpen it a bit more.

Not my best lunar image, you can tell the difference between doing this image on a 80mm refractor compared to an image I took using a 120mm refractor. The 120mm just gives you more contrast, light and generally a better image. You can see the 120mm moon image here: https://www.astronomylog.co.uk/2011/09/15/harvest-full-moon/

But if you want really sharp lunar images then a webcam type camera is a better idea, where you can take up to hundreds of frames a second and just take the best frames and stack those all automatically in programs like Registax. Here is an image where I did just that and created a mosaic: https://www.astronomylog.co.uk/2013/03/20/moon-mosaic-with-altair-astro-8-gso-rc/