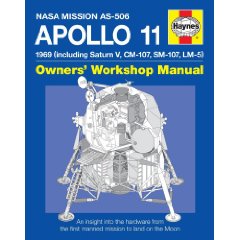 Astronomy Manual by Haynes – The Practical Guide to the Night Sky 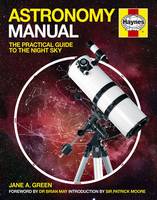 This Astronomy Manual by Haynes (yes the people who publish the car manuals) has an introduction by Sir Patrick Moore with the foreword by Dr Brian May.

The Astronomy Manual begins with details about everything in our solar system. The images and diagrams are very good, and easy to read and understand. The book reminds me of a type of colourful encyclopaedia. The Sun and each planet in turn is covered in full colour with images of the planets moons and with lots of information on each planet.

The Our Perspective chapter looks at where we are in the galaxy and this chapter covers Stars, Exoplanets, the Milky Way galaxy and more. On top of these, Quasars, the different types of galaxies and the Big Bang are also covered.

There are then two chapters split into amateur viewing and professional viewing. The amateur viewing chapter starts with naked eye viewing and how to read star charts and planispheres. This chapter includes some basic star charts and then takes the reader through some of the more common constellations in more depth. There is then information on binoculars and what to look for when purchasing a pair as well as how they work and how to get the best out of a set of binoculars for astronomical use. The book then talks about the various different types of telescopes that can be purchased and how to use Go-To telescopes and how to polar align your mount. The book then covers equipment accessories such as eyepieces, filters and lots of others astronomy accessories. There is an interesting section on the various types of astronomy computer software that can also be purchased.

One very interesting section in the amateur section is how to create your own observatory, and there are details on creating roll off roof observatories or using a Sky pod, shed or a dome as your observatory.

The professional viewing chapter covers all the major high end professional scopes that are sited around the world and those in space, such as the Hubble Space telescope, Spitzer and Chandra. Gamma Ray Bursts are covered here as well as imaging in the infrared. The final part talks about the possible future of telescopes.

There are several appendices in the book including lists about the constellations, as well as simple star maps. There is also a rather nice lunar map showing the features of the moon. There is also a list of the Messier objects for reference.

It’s nice to see an up to date book on Astronomy which even includes details about astronomy apps on the iPhone and Android smart phones. The book is also very up to date when it comes to the information on DSLR and CCD astrophotography. There is also a section on Webcam imaging which is a very cheap way to get into imaging the planets and the moon.

This is a very good overall book on Astronomy, as it contains a little bit of everything you ever really needed to know. This is definitely a book for beginners as well as those who have been into astronomy for a while. 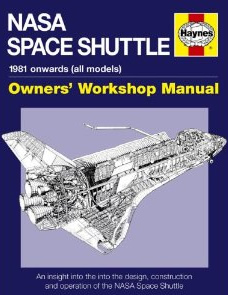 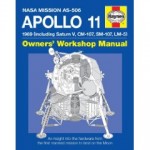 The Apollo 11 Manual by Haynes really caught my idea when reading the December 2009 edition of The Sky at Night magazine.

What a great and very unique gift for an astronomer, the acutal intricate manual to the Apollo 11 spacecraft in a Haynes style book.

This manual looks at the evolution and design of the mighty Saturn V rocket, the Command and Service Modules, and the Lunar Module. It describes the space suits worn by the crew and their special life support systems.

The book also tells you about how the Apollo 11 mission was flown – from launch procedures to ‘flying’ the Saturn V and the ‘LEM’, and from moon walking to the earth re-entry procedure.

Perfect for any astronomer or someone interested in space flight.

Buy the Haynes Apollo 11 Manual from Amazon with Free Delivery.