First Light and Beyond by D A Jenkins – Making a success of astronomical observing. 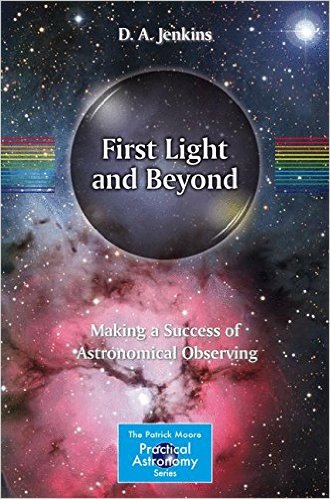 ‘First Light and Beyond’ is for the visual observers, it covers all aspects of how to get you equipped and prepared for the observing night ahead. A large section of the book is then given to the constellations and where to find the main astronomical objects to view.

The beginning of ‘First Light and Beyond’ starts off by covering all the basics of the night sky including the motion of the sky, how to measure distance, which constellations appear in certain seasons etc. There is more information on such things as how to find the object you are looking for whether it’s via an App or a planisphere. The beginning of the book also covers magnification and the use of various eyepieces. It then goes onto discuss collimation, cleaning your telescope and polar alignment of your mount.

The next chapter covers where it’s best to observe from, as well as about universal time. It tells you when is the best time to view the planets and meteor showers as well as about observing conditions.

Chapter 3 is about your equipment, this chapter covers binoculars, finderscopes, star charts, eyepieces, dew prevention, filters, GOTO telescopes as well as many other things. It actually has a section about useful household items you don’t want to forget about using such as carrying cases, observing chairs, notebook, spare batteries, extra clothing and using mosquito repellent.

This chapter ends with a section on completing observing report forms and how to star hop. Then the next 100 pages are dedicated to constellation maps and images of the night sky and how to see them. This section is split up into 2 sections, one for star clusters and nebulae and the other for galaxies. Each of these sections provides you with many star maps, some images of the object in question as well as written useful information about the objects.

Chapter 6 tells you to treat yourself to dark skies. This chapter introduces you to the international dark sky association and asks why observe under dark skies? Mainly because the next section is given over to a number of objects that are suited to being viewed under dark skies. This chapter ends with some useful information on travelling to dark sky locations and what to expect and of course what to take by the way of packing tips.

Now originally I said ‘First Light and Beyond’ was only for observers, well there actually is a small chapter on getting into astrophotography, when I say little it is only about 12 pages. It covers simple point and shoot cameras, and DSLR cameras. It mentions imaging through the eyepiece, piggyback mounting your camera onto your mount and camera tracking mounts. There is also a brief introduction to a few astronomy software programs like FITS Liberator and ImagesPlus.

The last few chapters cover topics such as astronomy magazines, astronomy books, astronomy websites and about public outreach programs and how you may want to start your own astronomy club etc.

Overall I quite liked ‘First Light and Beyond’ because it wasn’t just about star maps and where to find objects in the night sky but it also contained extra information such as travelling to dark skies and about the equipment you need for visual observing and how to plan an observing session.

I would say this was aimed at the beginner to intermediate astronomer. It contains a good number of images, some colour some black and white. I think this is the kind of book that you would read cover to cover as each section is well written and does not go into massive amounts of detail it just gives you the right level of information and allows you to go off and find out more if you are interested in that area of astronomy.

Where can I buy the First Light and Beyond book?

You can buy First Light and Beyond from Amazon UK