Managed to get out and see the Russian supply module and the International Space Station travelling across the sky.

I was amazed to see them both travelling in perfect alignment across the sky, but the supply module was well in front of the ISS, by a long way.

This photo shows one line of the ISS and Russian supply module as both were travelling in the same line. 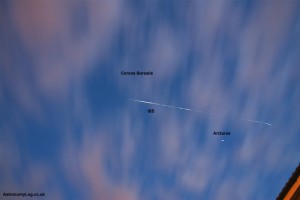 Two nights ago I had a go at videoing the ISS with my telescopes by manually moving them myself to get the ISS on the CCD chip, only trouble a couple of nights ago was that the ISS was not very bright and it was not visible for very long.

So last night I decided to instead just capture the ISS light trail with my camera on a tripod.

I began by visiting Heavens Above and finding out when the International Space Station would be passing my location. You should always look to see how long the ISS is visible for (the longer the better) and how bright it will be (brighter the better).

I set my camera up on my tripod and set it the the manual setting and set the exposure to be 30 seconds with a 2 sec timer delay, so I did not record me shaking the camera by pressing the shutter button. I also opened my widest lens to 18mm.

The great thing about the ISS is that if you can look out for it on the horizon and see it coming, you can then get yourself ready, especially if the ISS is in sight for a number of minutes.

From my images below you see that 30 seconds is not really long enough in order to catch the trail across the whole width of the field of view. Next time I shall go to the bulb setting and choose my own exposure length, perhaps it will end up being about 1 to 1.5 minutes. 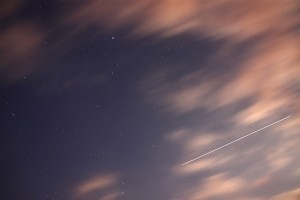 The interesting thing about the second photograph is that a jet also came overhead and you see that light trail as well. It was fairly cloudy at the same time but the ISS actually flew lower than the cloud layer so was still visible throughout the shot. 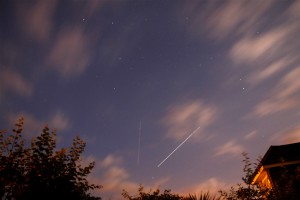