The Role of images in astronomical discovery 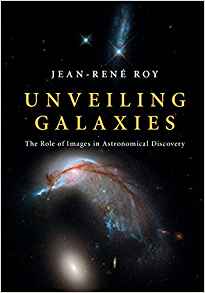 Unveiling Galaxies is split into three parts. Images and the Cosmos, Images as Galaxy Discovery Engines and Organising the World of Galaxies.

This book charts the history of the understanding of galaxies through the use of images that have been taken over time. These images became investigative tools and our understanding grew with the emergence of new technology for imaging these vast galaxies. The book also explores the impact of optical, radio and X-ray imaging techniques.

The final part of organising the world of galaxies discusses the importance of galaxy atlases and how astronomers organised those images in order to educate us and how they promoted ideas and pushed forward for new knowledge. Images that caused confusion among astronomers are included to show us the reader what challenges were faced by astronomers of the time. We are told how images helped to distinguish between deep-sky objects, such as nebulae and galaxies. We may forget that in the early days astronomers sat looking at images and maps, there were no computers. This was very much ‘hands on astronomy’.

Unveiling Galaxies is a beautiful book and very interesting if you are into the history of astronomy and the role that images have played through the years and changed our way of thinking about the universe.

This hardback book contains 270 pages with an appendix, bibliography and index. There are also colour plates/pages found in the middle of the book, as otherwise all images and diagrams are in black and white.

Where can I buy the Unveiling Galaxies book?