A Photographic Atlas of Selected Regions of the Milky Way 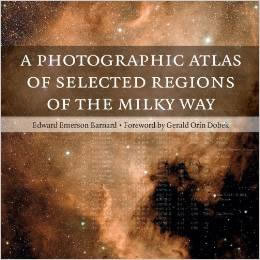 Edward Emerson Barnard’s A Photographic Atlas of Selected Regions of the Milky Way was originally published in two volumes in 1927. These two volumes contained a great deal of information including photographic plates of the most interesting portions of the milky way, descriptions, charts and data. At the time only 700 copies were ever printed, this made the original edition a collector’s edition.

This edition has now been reproduced which contains both volumes of Barnard’s Atlas. This edition now contains high-resolution images of the original photographic plates and charts. There is also a fold-out section with a mosaic of all 50 plates combined into a single panorama.

The main parts of the book include a catalogue of 349 dark objects in the sky, of which 182 were printed in the Astrophysical Journal in January 1919. There is then the catalogue of 352 objects in J2000 co-ordinates.

The first plate and chart is the region of the double cluster in Perseus, each section contains a description of the area and what it contains as well as the objects that are located on the plates and there positions. There is then the chart and plate which are opposite each other on the pages.

The plate images themselves are of very good quality for their age with the charts showing you important objects that can be found on the plates.

Overall this is a very good book, and the book still seems very much like a collector’s item.