The Observer’s Guide to the Southern Sky 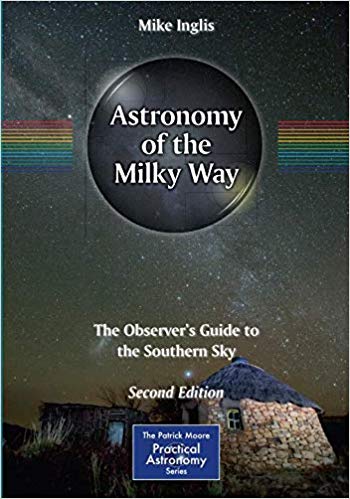 This is the second edition of Astronomy of the Milky Way by Mike Inglis. This second edition has been updated with new science that has been found out about the objects in the book. This version of the book also benefits from a larger format with re-drawn maps and an increased number of images in colour.

Astronomy of the Milky Way takes us through the highlights of the Southern hemisphere throughout the year. It starts what to see in January and February and then March and April and finally May and June. Why only half the year, well you have to read book 1 in order to get the other months, as the author admits they can’t all fit into one book.

There are some great full colour images of celestial objects and some very clear constellation diagrams as well as lots of data about the objects including RA and Dec and magnitude.

It’s nice to see books split up by month as they can be great for reference when you are planning your observing sessions throughout the year and you want to see what’s in the sky tonight to observe or image. Overall Astronomy of the Milky Way is a great book for those wanting to familiarise themselves with objects in the Southern hemisphere.

Where can I buy the Astronomy of the Milky Way book?