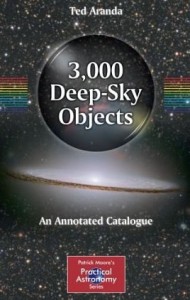 In this book from Springer part of the Patrick Moore series, Ted Aranda has chosen 3000 objects that he viewed over a number of years using his own homemade binocular telescope.

The book begins with an introduction on how to use the book, what the author used to view the objects and what each parameter means in the book and how to use the catalogue itself.

The main catalogue of objects is in the second part of the book, where you will find the objects divided into the seasons.

Each deep-sky object entry shows you the classification of the object e.g. ga for galaxy. You then get the astronomical catalogue number, the RA and Dec co-ordinates and in what constellation the object exists. Depending on what object you are looking at there is then more information. This may include visual magnitude, size, separation sizes for double stars etc.

Under each object there is then a description and further notes on the object written by the author.

At the rear of the book is an appendix about how to make your own star atlas, as well as a nice chapter on how to build your own binocular telescope with some good colour images of the author’s telescope. An index listed by object is also included at the end of the book.

Overall this is quite a thick book at over 550 pages and it contains many objects, it’s very thorough and nicely laid out. But this book is not really for me, I like a lot of colourful images to see what it is I should be looking at. I would have liked to have had less objects in the book but instead have images with most of them, even if they were just black and white images.