Which Telescope Should I Buy?

I once asked myself this same question, “Which Telescope Should I Buy?” Luckily I had an astronomy shop not a few miles away from my house and they helped me greatly in deciding what model telescope to buy. But most of us don’t have a telescope shop nearby so may end up buying from an online retailer like Amazon, WEX Photographic etc.

I began wanting a computer controlled telescope and I set myself a budget for my birthday of £250. The problem was that most of the £250 was going to be spent on the electronics inside the telescope and little was left for the optics, so all I would get for this was an 80mm telescope.

Although an 80mm telescope may sound fine, when you are visually observing you really want the biggest telescope aperture you can afford, as then you will see more space objects and they will appear sharper and brighter.

Please don’t think that you will see Hubble type images in colour through your telescope eyepiece you will not.

Instead of the 80mm I was advised to go for a manual telescope which I could add simple motors to later on (which I did). I ended up going home with a 130mm refractor telescope by Bresser for just over £200 complete with a sturdy tripod. I used this telescope every clear night I could for about 6 months before I upgraded it, because I was hooked.

The first thing I remember seeing was Saturn, all I did was pick a bright star (or so I thought) and pointed my telescope at it, and there was Saturn, amazing.

Just like any hobby though you don’t know if you are going to get hooked on the hobby or just use the telescope now and again, so based on that I suppose you should set yourself a budget like I did.

There is a very good reason why you may want a computer controlled GoTo telescope. The main reason is because they are now easy to set up and of course you tell it what you want to look at and the telescope will move (slew) to the target. This can save a lot of time and frustration. But again remember that although the handset may have 4,000 objects in it, your telescope may only allow you to visually see up to about 100, after that the rest may be too faint or appear just as a smudge in the eyepiece.

Remember that if you go for a GoTo telescope you will need to power it, so budget for lots of batteries or having to purchase a power supply then somehow get the power supply to the telescope in the garden. Whilst on the mention of gardens, please don’t set up your telescope indoors and use it to look at the stars through windows as it’s not the same, you will be disappointed and you may not even be able to get the telescope to an actual sharp focus on an object, go outside instead.

If you are on a limited budget, then try and get a telescope that comes with a stable tripod and as much aperture as possible (lens diameter). Telescopes under £100 may not allow you to see everything in the sky, but you will see the moon, stars, the Pleiades, Orion nebula and some of the larger planets like Jupiter and Saturn. Plus if you get a solar filter you can see the Sun (but that’s another topic). 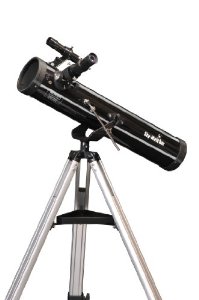 This is a 3″ telescope so not very big but good value for around £80. Skywatcher are a trusted telescope brand. 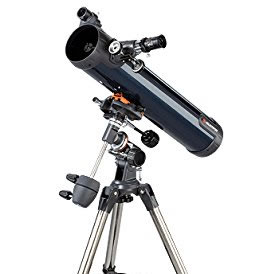 The Astromaster 76EQ is from Celestron and very similar to the Skywatcher Astrolux above, but the Celstron telescope tripod and mount do look more robust and better quality – but you will pay a little more at just under £100. You also get some planetarium software with this telescope, but you can always use free software from the internet like Stellarium.

GoTo telescopes will slew to the object you choose on the provided handset and track that object all night long, so keeping it in the eyepiece – instead of you having to chase the item as it moves through the sky. Obviously these are a little bit more money, but they are worth it in my mind. 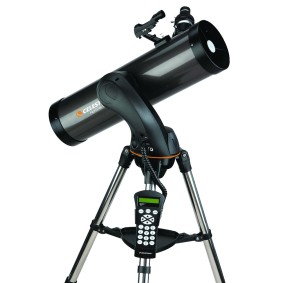 This is the NexStar 130SLT Reflector, and it’s fully computer controlled with 130mm aperture or 5.1″. Comes with red dot finder, but as it’s a reflector it will require collimation to get the best images. At just over £300 it’s good value and will show you lots of night sky objects. 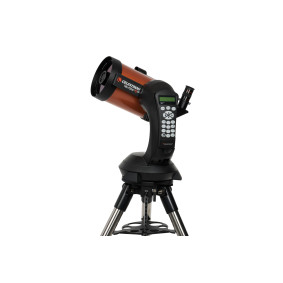 The NexStar range is more advanced range. This range comes in a number of aperture sizes starting with the 4SE, 5SE, 6SE and 8SE. Fully computer controlled with 10,000 night sky objects in the handset database for around £400. The 6SE is around £900 and the 8SE is around £1,400. 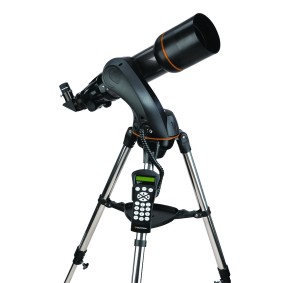 This is one of the telescopes I nearly purchased as my first telescope. Fully computer controlled and no collimation required as it’s a refractor. At 102mm it’s not a small aperture, I would say mid-size all for around £350. 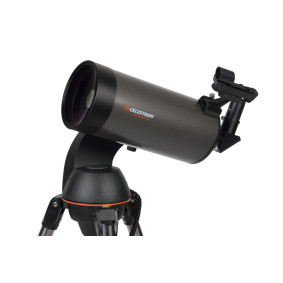 If you choose to go for a non-GoTo telescope then you will find that you get a lot bigger telescope for your money (5 inch to 8 inch telescopes), this allows you to see fainter objects and gain more contrast on all objects.
Note all these telescopes listed below are reflecting telescopes, so they do need to be collimated to get the best out of them. This is making sure the optics of the telescope are aligned to give you the best image. Refracting telescopes do not need to be collimated, but come in smaller aperture sizes (typically 3 to 5 inch). 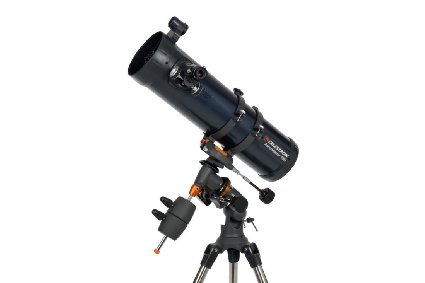 For around £130 this is a very good telescope with 130mm aperture or 5.1″. Comes with red dot finder. The tripod looks very sturdy a real quality look to this setup. If you go for the MD version it comes complete with motor drives to track objects. 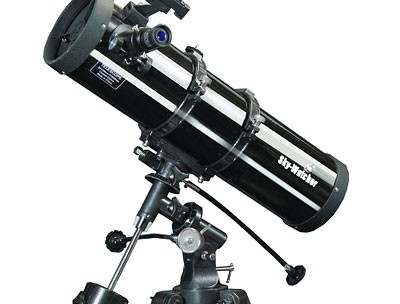 For just below £200 this is a very capable telescope with an aperture of 5.1″ or 130mm on an EQ2 tripod. This also comes with a red dot finder which is a must on any telescope, if yours does not comes with one I recommend buying one separately and adding it to your telescope. 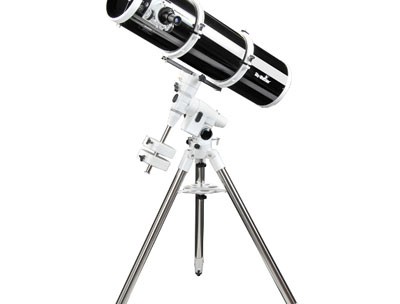 This is a 200mm or 8inch reflector telescope but is on a very good and well known tripod the EQ5. This tripod is easy to expand and can have motors added to it later on if required in order to track objects. That’s why this package is just over £400. You are paying for the 8″ telescope but also the very good and sturdy tripod.

Buy the Skywatcher Explorer 200P and EQ5 from WEX Photographic 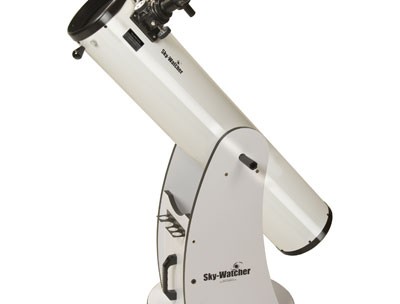 This is similar to the Orion SkyQuest below but the Skywatcher version. An excellent price for the size of mirror that you get, a massive 8″ mirror will show you lots of sites in the sky. A brilliant set up for under £300. 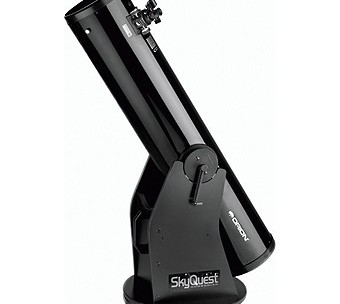 This is a large aperture Classic Dobsonian reflector telescope of 8″ which will provide amazing views, it stands directly on the floor on its base so not tripod legs to trip over in the dark. This telescope is just over £300.