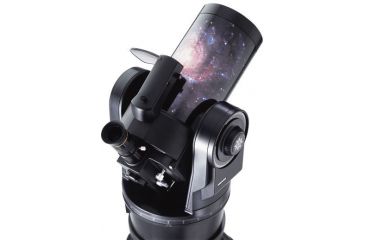 My son was lucky enough to have won the Cambridge Young Astronomers prize of a 2nd hand Meade 105ETX at the 25 anniversary event in 2015. So I thought I would do a quick Meade ETX105 telescope review.

I had previously taken the main telescope part out one evening and placed it on a table top and manually viewed The Moon, Saturn and Venus. But as the evening was looking to be clear and the moon was already out in the afternoon I decided to get the full tripod and telescope out.

I set up the Meade deluxe tripod and screwed on from below the main ETX telescope part. I then plugged in the handset and used a portable power tank to power the telescope. I leveled the telescope and pointed it north and made sure the main tripod leg was also facing roughly north. I then turned on the telescope and ran through the alignment setting. I chose ‘Easy’ align, which selected 2 stars for me, I just aligned both stars in the eyepiece and pressed ‘Enter’. The alignment was successful.

I then chose a tour, ‘Tonights Best’. which runs through a list of available sights. Although I must say all were not that visible in this 100mm scope. Some sights did stand out though, these were the Moon (of course), Saturn, M13 and the Ring Nebula. Other sights were hard to see like galaxies and the dumbbell nebula, although seeing was not that perfect and there was a lot of cloud around.

I was quite impressed that after just 2 alignment stars that most of the objects I chose did appear in or near the centre of the eyepiece. The telescope does suffer from quite a bit of backlash in one direction when using the handset. I was quite happy about the motor noise, the motors are reasonably quiet, and I did expect them to be noisier.

I tried some imaging of the moon, by placing the ZWO Optical ASI120MM-S mono camera into the eyepiece holder. I took about 1000 frames at about 40fps using SharpCap v2. I must say the seeing was terrible and moon was among clouds, but the images seemed quite promising. Obviously not the best moon images I have ever taken, but fun to have a go at. 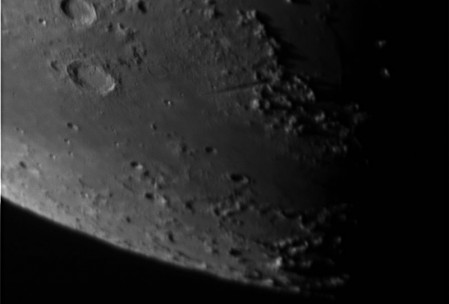 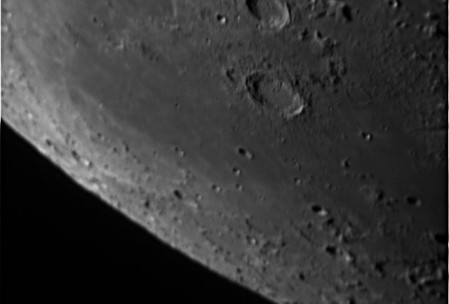 It’s nice to have available a portable mount and telescope that tracks the night sky. The downside is that the EXT105 is no longer in production, so getting accessories for it can be hard. It would be nice to get an adapter so the ETX105 could take a DSLR camera either at the back or even better on the top.