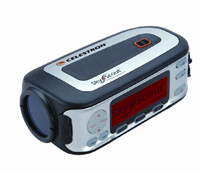 The Celestron SkyScout is a revolutionary handheld device that uses advanced GPS technology with point and click convenience to identify thousands of stars, planets, constellations and more.

Simply point the SkyScout at any star in the sky and click the “target” button. The SkyScout will tell you what object you are looking at. To locate a star or planet, select the object’s name from the menu and follow the directional arrows through the viewfinder.  SkyScout tells you when you are on target. It’s that easy!

Once you have targeted an object the real fun begins. The SkyScout includes entertaining and educational audio and text information, including facts, trivia, history and mythology about our most popular celestial objects.

A fun learning tool for all ages, the Sky Scout personal planetarium puts the knowledge of an expert astronomer in the palm of your hand.

The Celestron Sky Scout is really easy to use and nice and light to you can hold it up for ages with no problem. The accompanying extras are also good such as the carry case, headphones and free batteries. It also important to keep an eye out on the Celestron web site for updates to the SkyScout, which allows you to update the firmware on the machine and also download exciting new updates of objects in the sky to look out for. 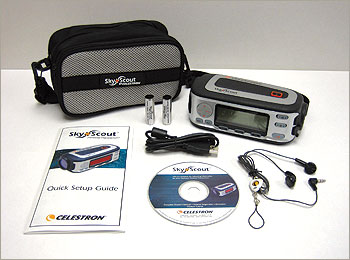 This fabulous piece of kit puts expert astronomical knowledge into the palm of your hand. Point the Sky Scout personal planetarium at a heavenly body and it will identify any of 7,500 stars in all 88 constellations using its in-built celestial database and GPS technology.

Sky Scout will recommend the twenty best celestial objects to spot on any given day, time and location, and help you locate thousands of stars, with comprehensive text and audio descriptions for the most popular objects.

Simple to use, light and rugged, with a backlit LCD screen displaying comprehensive information, Sky Scout will bring the night skies to life.

The Celestron SkyScout is available from Amazon UK for around £170 delivered (December 2010).
Buy SkyScout from Amazon