Shooting the night sky with my Canon

The second clear night in a row – was this possible? Tonight (19th July 2007) I decided not to take out the telescope but just take out my new Canon 400D and my remote control and tripod.

I had ideas of trying out the Bulb setting which everyone talks about and trying out some photography from a static tripod using the remote control that I purchase from eBay – actually the tripod was from eBay as well!

Anyway, I put my camera onto manual and then the bulb setting and this time remembered to put the lens onto MF – (manual focus). I then directed my camera at the heavens and took some photos at varying exposure times.

I kept darting back into the house to view the photos on my laptop under red light provided by my red torch to see how well I was doing.

The problem I had looking back was that I did not keep an exact record of what exposure times I was using etc. I must remember to takes notes next time on the settings used and exposures used etc.

Anyway below are the best three photographs I managed to make. I did play with the photos a little in Fireworks, but it appears that most people use PhotoShop instead, so I need to really look at using this, especially because it has a lot of extra plugins available, including astronomy plugins. 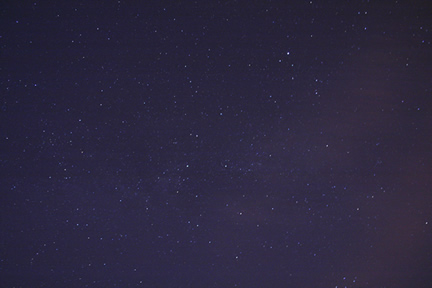