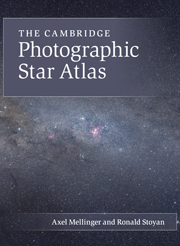 The Cambridge Photographic Star Atlas is a large coffee table sized book which contains double page spreads, one side is a star map and the other side is a matching real image of the night sky.

The sky maps show double stars, variable stars, open clusters, galactic and planetary nebulae, globular clusters and galaxies. There are 82 large scale charts with a scale of 1 degree per cm. This means the book contains over 1500 deep-sky objects and 2500 stars.

The beginning of the book shows you how the author processed the night sky images. Axel Mellinger actually visited three dark sky sights, Texas, Michigan and South Africa in order to take the images. He created his own photographic equipment to take his images and ended up with 70 gigabytes of data. It was then semi-automated script-controlled processing that compiled and created the images.

The Photographic Star Atlas is a great book as a visual aid, as you can really see where these deep sky objects, such as the Messier objects really are in the sky, even if you live under light polluted skies.

It’s strange to actually see the photographic star maps as they were taken under very dark skies, and they look nothing like the night sky above me. But I did find it interesting to actually be able to see the deep sky objects in the book, but not in the sky. The star maps are so detailed I actually found it hard to make out the main constellation stars.

The Cambridge Photographic Star Atlas is available at Waterstones