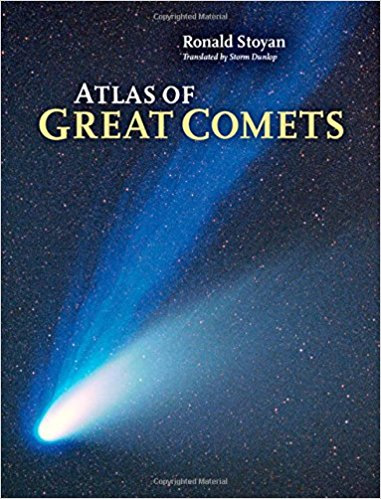 The Atlas of Great Comets is a hardcover book by Ronald Stoyan. It’s hard to imagine what a comet book will contain, whether it’s lots of images and details of where the comet is now and when it may be back. But this book is a lot more than that, it goes right back in history and includes early drawings of what people saw in the sky at the time, you could call this a history book.

The book begins with an introduction to comets including cometary beliefs and fears, how the comets were seen in art, literature and poetry. There is a section at the beginning of the book detailing the most successful comet discoverers who have at least 10 comet discoveries. At the top of this list is Robert McNaught with 82 followed in second place by Carolyn and Eugene Shoemaker with 32. After the introduction to comets section the main section of the book then takes you through all the main comets from 1471 in the Middle Ages right up to Comet McNaught in 2007.

The Atlas of Great Comets contains a great many images of the various comets in both black and white and colour. Each comet also contains a table with information like the discovery date, the discoverer, date of closest earth approach, perihelion date, maximum magnitude etc. There is also a constellation diagram for each comet showing where it was in the sky at various dates in time. If there aren’t any images of the comet then you are presented with some wonderful historical drawings.

When it comes to the writing, each comet has a section describing the comets orbit and visibility which goes hand in hand with the constellation diagram. There is also a section entitled “Discovery and observations”, this tells you how the comet was discovered and what happened to it whilst it was on its journey past the Earth. Finally there is a section entitled “Background and public reaction”.

[expander_maker id=”1″ more=”Read more” less=”Read less”]
The appendix includes a glossary and bibliography and references, it also provides a list of the comets in the book together with the comets designation, perihelion date, distance, distance to Earth in astronomical units, maximum magnitude and maximum tail length in degrees.

The only downside of the book is that I would have expected to see some more comets in the book, as the last comet in the book is from 2007. Whereas since I started astronomy as a hobby I have imaged and witnessed comet Holmes 17p in 2007, comet Lulin in 2009, comet Panstarrs in 2011, comet ISON in 2013 and comet Lovejoy in 2014. May be these will be added in the second edition of the book, unless these comets are not considered ‘Great Comets’.

Where can I buy the Atlas of Great Comets book?

You can buy Atlas of Great Comets from Amazon UK