Now I must be really getting the astronomy bug, as just a few days after ordering a Philips SPC900 webcam, I have jumped in with both feet and ordered a Canon 400D SLR Digital Camera from Comet, which was a good price as they gave me £40 off by using a code – ‘SUMMER40’ if I spent over £400 (or SUMMER30 if you spend over £30, and SUMMER20 if you spend over £20 – but that ends Friday 13th July), plus there is a cashback off on at the moment of £50 when you buy a Canon, so that should make the camera £389 with free delivery.

I went for the 400D instead of the 350D, as I thought with me constantly taking off the camera lens and adding the telescope adaptors that dust may get into the chip, but the Canon 400D has a shake clean mechanism to remove dust from the sensor, plus alot of other astronomers and amateur photographers seem to have this camera – although that does not make it good!

I then just need to purchase a nice tripod, case, remote control, memory card and of course the all important t adaptors in order to rig it up to the telescope – does this spending on this new hobby ever end?

I finally went for it and ordered a Philips SPC900 webcam from Amazon, which is actually being sold through Pixmania, but the postage is less through Amazon than purchasing it direct with Pixmania – strange.

As soon as I get it and get a clear night, I shall try it out and report back with comparative images from both webcams.

As Seen on ScopesNSkies Web Site

As I live close to the ScopesNSkies store, I popped down there the other day to purchase a webcam adaptor and a 4x ImageMate to use with my Logitech Pro 4000 webcam.

I have now noticed on their website that I now have been caught on film and can actually be seen in the showroom looking round – at last I’m famous and can be found on their site! 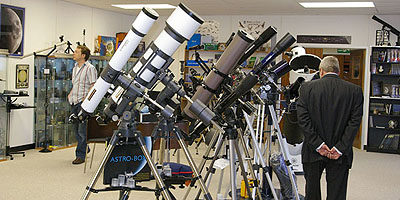 That’s me on the left hand side in the nice stripey shirt.

After many months of being interested in telescopes and looking at various websites including ebay and other telescope retailers, I discovered that I live very close to the new location of Scopes N Skies showroom and warehouse.

After a couple of hours discussion with the team I decided to purchase a Meade Bresser Messier 130N Telescope. I originally thought I would come home with a Meade ETX80 with the autostar system, where the computer does all the work, but after finding out more, I instead went for a manual telescope.

When collecting the Meade Bresser Messier 130N I could not believe that it came in two boxes, one for the mount and one for the telescope itself. Now my girlfriend was going to be shocked that I had purchased another hobby item that is very large and takes up a lot of room, especially as one of my other hobbies is playing the drums.

Anyway it’s my first telescope and taking some time to get used to, but as the weather has been so bad lately I have only been outside once, but have decided in the last few nights to use it from a spare bedroom window on the moon.

Welcome to my Astronomy Blog

This is my new blog about Astronomy, a subject which is now one of my many new hobbies. I hope to update this blog on at least a monthly basis, but that depends upon the weather.

I hope to review some equipment, show off my telescope images, review astronomy books and much more and generally keep my own digital astronomy log/diary.